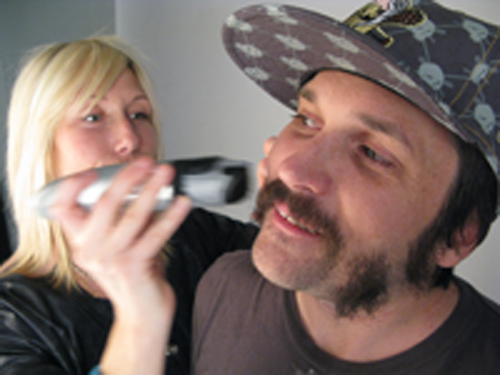 I grew up outside of Cleveland, Ohio which gave me a twisted sense of a blue collar work ethic.  (By the way, truth be told, any negative thing you’ve ever heard about Cleveland is probably true. And even if you’re from Cleveland and you’re reading this, dig deep, you know I’m telling the truth.) After stints in southern California and Colorado, I now live in Portland, Oregon with my wife and son. His name is Eero (Arrow) and he’s 10 years old, and as much as it crushes my soul, he has no interest in skateboarding… none… ABSOLUTELY NONE, I’m starting to wonder if he’s even mine.

My wife’s name is Gretchen (she loves skateboarding….. again, adding to my worries). We own a beautiful salon in downtown Portland. Ya, you read correctly, a SALON. It’s actually the defacto board room for Yana. Many long meetings have gone down with the soothing drone of a hair dryer in the background.

I won’t tell you how old Gretchen is cuz she’d kill me, and that doesn’t do either of us any good. But as lightening may strike me down if I’m lying, “she’s drop dead gorgeous”. Sort of like if Gweneth Paltrow and Ellen Barkin had a daughter. STUPID PRETTY! No one that I have ever met can figure out why a stunner like her shacked-up with a dork like me. Super hot best friend, I WIN!

And since I inadvertently mentioned ‘lightening’ I should probably confess that I’ve been struck by it… in the neck of all places. And well, since I’m baring my secrets here, I should also let you know that I was also bitten by a shark, in the hand. Thank God the lightening and the shark didn’t switch locations.

I still wear the same low top Vans that I got married in.

I know the difference between a frontside and an indy air… a feeble and a smith grind… and a fakie 180 and a switch 180. But even with all that useless knowledge what really gets me amped is designing stuff. I love color and curves, texture and feel, and form and emotion…… ew, i just read that last sentence and it seems as though i slid into a first year college design student….. oh well, i guess that’s part of who i am.